I’m starting to think guys have it harder on dating websites than girls. It’s known that there are more men than women on these sites, so that’s already an advantage for straight women (as far as more of a selection goes), but does it go beyond that? I haven’t done any proper research, but most of the guys I speak to tell me that they get very few replies to their messages, and fewer initial messages from girls. I wonder if it has something to do with the classic “the guy asks the girl out”, rather than the other way around. I think it’s become less of a big deal for a girl to make the first move today, but it seems that most guys are still the ones to approach the girl. -And of course most marriage proposals are definitely still being done by the man as well. Not to mention more women are still skeptical about meeting a stranger from the internet than men fear meeting a strange women. So, some work goes into maintaining the idea that they’re not just some creep.
A male friend of mine recently signed up with one of the dating websites I frequent. He asked me to fix up his profile a little. I spent about three hours logged in as him and was surprised I didn’t get a single message. The ten messages he’d sent out remained unanswered. I also discovered that it isn’t easy to speak highly of yourself and not sound completely cocky, as a guy. After some difficulty with the task, I wound up leaving a sort of testimonial for him on his profile, as myself. It was a sort of experiment. Either girls would be turned off by it, or they’d find it cute and be intrigued that another girl had such great things to say about him. It’s been about a week since that experiment and you know, he’s gotten a few replies to the first messages he sent out, a few new messages from others, and has even progressed one conversation off of the website and into texts. I take most of the credit for getting him to that point on the site –But he’s still claiming some sort of 20% that I’m not sure he deserves credit for from the start ;-) …It’s also not the first time I’ve heard of a girl helping a guy fill out his profile, or a guy making suggestions to a girl about hers. Sometimes I wonder if we’re all just falling for each other’s profiles written by someone else…

In other news…During another night tired of dating websites, I tried fooling around with my search options. I spent some time looking at some 0% matches and you know, it made me pretty happy I’m not with any of those guys. Some of them were just awful and while I still haven’t found whatever it is I’m searching for, sometimes it’s nice to know who I don’t have to end up with. I was also wondering about the guy who wanted a girl who would go out to the club with him every night. Why is he looking for her online? Wouldn’t he have better luck finding her at the club? -Oh, and today I received a message from a guy who I’m pretty sure has tried to contact me a few times in the past. His message wasn’t so bad, but today I squinted at his picture and went “Does he…Is that…” and upon closer inspection, yes that was a puppet on his hand. It could have been the fact that he also happened to be unattractive, but I never knew what a turn off a puppet could be. I just don’t see myself dating a ventriloquist. The picture just made me frown upon coming across his profile. -Does that exist? Different expressions people made upon viewing different dating website profiles in some sort of video? Well, It should exist, anyway. 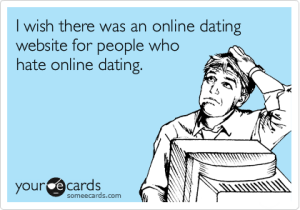 11 thoughts on “Do Guys Have It Harder On Dating Websites?”